Macro and Micro economic growth are paramount for all the business activities we undertake. However, as per the International Monetary Fund’s (IMF) World Economic Outlook Report of April 2022, the overall global growth is estimated to decline from 6.1% in 2021 to 3.6% in 2022. The ongoing Ukraine-Russia war and sanctions in Russia play a major role in the economic setback and are expected to contract global growth further in the coming months as it has a direct impact on several economic elements. Another contributor to the near-term global outlook is inflation, which has been on the rise even before the war began.

In response to this, many central banks have tightened their monetary policy which has led to a rapid increase in nominal rates across advanced economy sovereign borrowers. A similar trend has been witnessed in emerging and developing economies as well.  Moreover, low tax revenues in 2020-21 and higher COVID-related spending has eroded the policy space in several countries. As the Governments of major economies are working towards rebuilding the buffer, they are increasingly challenged by rising borrowing costs. Hence, given the low bandwidth, fiscal support is expected to decline in 2022 and 2023, particularly in advanced economies.

In 2023, global GDP growth is projected to moderate to about 3.3%. This estimation is based on the assumption that the conflict would remain limited to Ukraine, further sanctions on Russia would exclude the energy sector and the pandemic’s health and economic impacts would subside over the course of 2022.

Total investment of US$ 210 billion in 2021 was driven by a record number of Fintech deals. This was mainly driven by funding from venture capitalists, wherein they made the highest-ever investments of US$ 115 billion surpassing their previous high of US$ 53 billion in 2018. 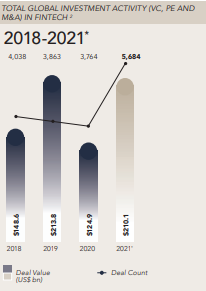 Traction was witnessed in varied kinds of Fintechs, some of them are mentioned below-

Investments in this space soared from US$ 5.4 billion in 2020 to more than US$ 30 billion in 2021, given the increased recognition of the role of crypto and its core technologies in modern financial systems. While the growing traction has received high support from certain countries, some countries are either considering the development of digital currencies, while some countries like India and China have completely banned the mining and trading of cryptocurrencies.

Another area that witnessed robust investments in 2021 was the BNPL space. Block (formerly Square) recently announced the acquisition of Australia-based AfterPay by 2022. The deal is apparently the largest M&A in the history of acquisitions in Australia, hence, the growth in this space is expected to continue.

Financial institutions have been under immense pressure to enhance their core banking systems to facilitate better customer experiences by leveraging the cloud and reducing their dependence on legacy infrastructure. This trend can be seen worldwide. In 2021, a growing interest was witnessed in Fintechs who can help with such services, especially for Tier 1 banks.

Progress of the Global Fintech space

Global investments in the payments space witnessed significant traction in 2021. Digital transformation, growing acceptance and use of contactless and digital payments and rising demand for alternative modes of payment like BNPL were the key drivers. The payment sector not just attracted annual record-high venture capital investments but also accounted for the largest M&A deals during the year.

India’s real GDP grew by 8.9% in FY2022, up from a contraction of 6.6% in FY2021, as per National Statistical Office (NSO). The real GDP was impacted in the first half of the financial year as the country dealt with possibly the worst health crisis it has ever faced. However, the GDP bounced back in the second half supported by consistent fiscal measures by the government coupled with monetary and liquidity measures taken by the RBI. Just when things were starting to normalize, the recent geopolitical conflict led to the loss of pace in the recovery and dampened the outlook again. Hence, India’s growth is projected to moderate to 7.2% in FY2023.

Indian Fintech space witnessed a 2x growth in several deals and 3.7x growth in funding amount in CY2021 compared to CY2020. Further, the average deal size rose from US$ 19.6 million in CY2020 to US$ 33 million in CY2021.4 This was due to funding rounds by PineLabs, BharatPe, and Cred, among others. Of the same, digital payment start-ups received the maximum funding amounting to 48% of the total. The number of Fintech M&A activities also increased nearly 3x to 26 in CY2021 compared to 9 in the previous year. Out of the 19 Fintech unicorns in India, 47.4% of them belonged to the payments sector followed by WealthTech at 21.1% and InsurTech at 15.8%. This surge in investment activity is attributed to the increased scale and rapid adoption of digital payments in the pandemic, as well as the increased interest of regulators and policymakers in the industry.

Other drivers have been technological advancements, the strong technology talent pool helping to rapidly build and scale Fintech business models. However, much has changed in 2022, as worldwide venture capital funding has slowed down. The situation in Ukraine, high inflation, and stock market volatility have prompted a flight to safety putting start-up values at risk. The total funding amount to Indian fintech companies was US$ 1.9 billion for 101 deals between January to May 2022. 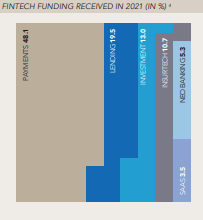 India’s digital payments business is at a tipping point, with revenues estimated to more than treble by 2026, from US$ 3 trillion now to US$ 10 trillion. In volume terms, the Indian digital payment market is estimated to exceed 21,700 crore transactions by 2026, owing to rising acceptance of established digital modes and novel payment options such as Buy-Now-Pay-Later plans and offline payments.

No comments to show.